This figure had 2 versions right away (although – I don’t know why – the 1st appearance Hulk should be grey)  But I do like when they make a new head mold for a variant figure.  Besides we get to see Hulks winning smile.  I love the way these figures look.  I found the green – but my friend Corry found the grey variant for me.  Thanks!  They come with a reproduction of Incredible Hulk #1.  Nice. 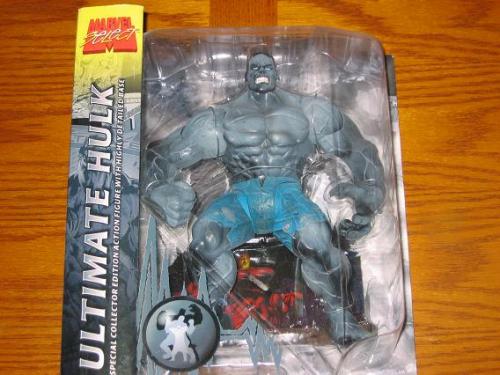 I’m not a big Ulitimates fan.  I did read where Banner leveled the team in order to stop Betty from going out with Freddie Prinze Jr., seemed kind of silly to me.  But the figure – is awesome!  One of the coolest expressions of any Hulk figure – they made him with a smirk – not just a smirk – but a cocky smirk!  That is so cool.  I think it’s amazing that this cool of a figure came out of a “ultimately” forgettable comic.  Picked him up at the Newbury Comics (man, I give those guys alot of business) in Kingston

Tee-hee!  Get it?  Ultimates – Ultimately? Oh – screw you, that was funny. 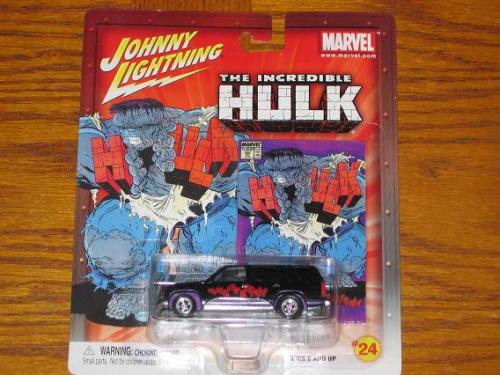 The Tahoe displays an image from McFarlane’s cover to # 345.  An absolute Awesome image that really deserves a cooler car.  I have a few cars in my collection – but generally try to pick up only very unique or very amazing looking pieces.  Luckily when you are obsessed with something you start to get items as gifts.  I think my friend Corry bought this for me.

I can still remember waking up on Saturday mornings just to watch the Hulk cartoon on UPN.  It may sound normal – but did I mention I was 21 when it was on?  Anyway, the two Hulk lines that came out from the animated show were “Smash and Crash” and “Outcasts”.  I will post the “Outcasts” line later – but here is the “Smash and Crash” line.

The Leader once had a weird red liquid in his head – but over time it seems to have drained from his head and dissapeared all together.  Should I be worried about that?

Zzzax is the other villan included in this set.  He made an appearence in the show – and Hulk beat him by throwing him into water.  Y’know – because he’s electric.  You can see a bit of fading on the Hulk on the bottom and the Leader cards.  This is how badly the sun hates your toys.  Keep them safe! These figures served their purpose.  They aren’t the best out there – but they are cool enough that Hulk collectors out there should rush to get them! 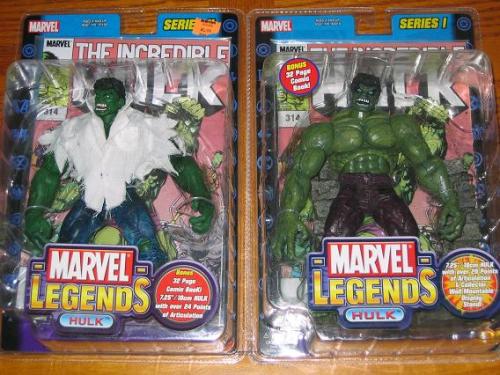 Here are the first 2 Hulk figures from the Marvel Legends series.  Series 2 was the same figures in different clothing – as you can tell they gave Hulk a shirt that they found at Building 19.  All ripped and stuff.  I think they did this to cover Hulk’s sexy chest.  Of course I could be wrong.  These figures were cool but the Hulk figures got better as the series went on – as you will see!

The shirtless Hulk also has a rare variant that I don’t own – one where his hands are bendy, soft plastic.  The Hulk that you see has hinges on his fingers to make them bend.

Also – these figures come with a copy of Incredible Hulk #314. 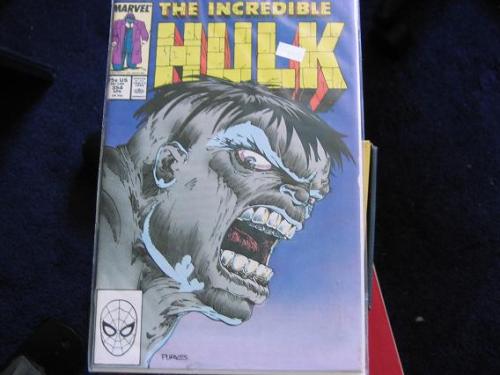 Peter David was one of the greatest writers for the Hulk – maybe it was because he did it for 12 years.  He came up with the incarntion of Mr. Fixit – and even though the Hulk has seen his share of great artists – Jeff Purves was one of my favorites.  He only had a small run on the Hulk – and he got better the more comics he did.  This is one of the most fun stories with Hulk taking on 12 “persuaders”.  The entire town goes buzzing about Fixit beating the men – and the bets start swaying in his favor soon after he throws the first one through the wall.  Purves style was very unique and he truly had his own vision of what the Hulk looked like.  The money shot in this issue comes at the end where the last “persuader” comes out of the room and then falls flat on the ground.  This is one of my favorite covers ever.