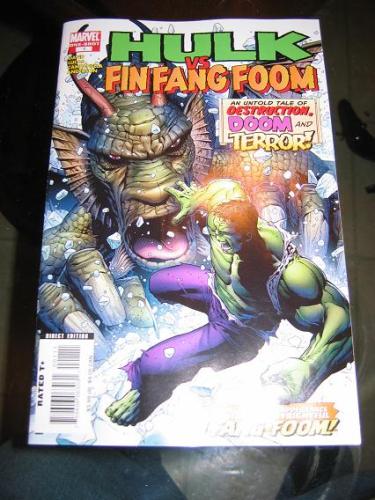 (Spoilers!) Let me start off by saying that this is a verys short story – too short in fact – but it’s also a great read.  The comic starts off with Hulk wandering around Antartica getting very tired.  “Even Hulk gets tired…” he says before he collapses and falls asleep.  Then, he turns back into Bruce Banner.  Banner wakes up indoors, inside a base camp for the scientists there.  Amazed that he could actually survive for as long as he did outside they ask him his name and he tells them “Bruce… Ross” The woman in charge is immedialtey aware that he is lying.

Outside, two scientists discover Fin Fang Foom frozen in the iceand mistake it for an undiscovered dinosaur.  One of the scientists takes off to get the rest of the team as the other begins to chip away at the dragon.  But suddenly, Fin Fang Foom breaks through the ice.  When the others approach they see the hole – but no dinosaur.  There team member is there but acting strangley.

Back at the base, Bruce is told that the army is on its way to pick him up. Bruce is about to object when everyone discovers the dead body of the scientist who discovered Fin Fang Foom.  The blame is immediatly put on Bruce, and after he is pistol whipped once The Hulk comes out.  Then, another scientist says “Looks like I picked the wrong person to regain my energy back from” and Fin Fang Foom comes out of the mans chest.

Hulk and Foom begin to battle it out and Foom is instantly impressed with Hulk’s strength.  Hulk throws Foom outside.  Foom grows to be enormous and rips the roof off the building.  Hulk says it doesn’t matter how big he gets because it’s strength that wins fights and Hulk is the strongest one there is.  Fing Fang Foom decides he can’t beat the Hulk in a fight and instead tries to reason with the Hulk, asking him to join him in defeating the Humans, making the Humans serve them.  Hulk takes a moment and says “Naaaaaah” and whips Foom around by the tale and then tosses him to the moon.  Literally – to the moon.

This story is a throw back to the old masters Lee – and the art is directly influenced by Kirby and Trimpe.  In fact, in one panel there is a great rendition of Kirby’s leaping Hulk as he battles it out with Foom.  This immensley fun read was brought to us by the man himself Peter David and it was quite enjoyable and the perfect way to get ready for Hulk #1 out next week.

One response to “The Incredible Hulk vs. Fin Fang Foom”