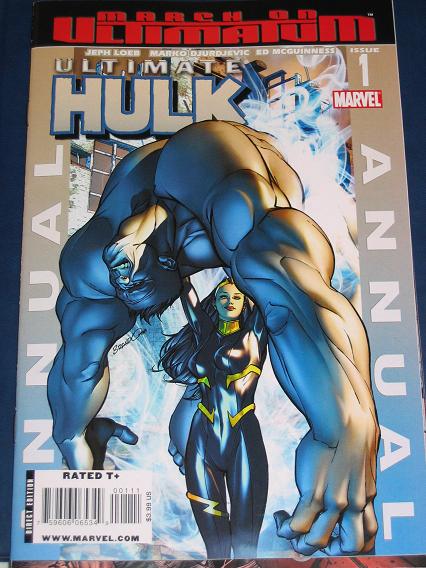 When, oh when, can we expect a Hulk story NOT written by Loeb.  I don’t know too much about the Ultimate Hulk – how he differs from the Hulk in the regular universe – but in the Ultimate Human mini-series the Hulk was completely badass!  Everything that they threw at him he handled and more!  So, Loeb takes over and… well the Hulk gets beaten up.

So we begin with Zarda beating the heck out of four super soldiers who were holding hostages for ransom.  Cap intervenes and saves the life of one of them telling Zarda that the Ultimates don’t take the life of anyone – including villains.  Zarda didn’t think that human lives were worth anything.  Cap tells her to take a trip and live life a little – wait… wasn’t that the plot of  Coming to America?  Anyways, Zarda takes off and we join her in a diner as she eats dinner.

Before we continue – I have to tell you that the first 9 pages were drawn by McGuinness – the rest of the book was drawn by Marko Djurdjevic.  While both artists are incredible and really make the book worthwhile, I always find it distracting when more than one artist draws a book.  Here it’s not too bad – it’s almost as if the book is split in two anyways.

So, finally, the Hulk shows up in this book.  The Hulk annual and the Hulk doesn’t show up until half way through it.  But now that he does he’s looking to eat something at the same diner Zarda is at.  The only issue is… he’s naked.  They refuse him service.  Of course they do.  Hulk gets mad and starts to smash.  This is when Zarda gets involved.  She battles the Hulk – but more like hands him his a$$ – then drags him to a Big and Tall Men’s shop and buys him pants.  They go back to the restaurant and eat – then, for some odd reason, Zarda asks the Hulk if there’s anything else he’d like to do… then they go to a motel and do it.  Yup – they do it.  And I mean the naughty it.

This story, unfortunately, is a waste of space and time.  Was it entertaining?  Yes…?  Just slightly.  Still not a great Hulk story – I’m thinking Loeb doesn’t even LIKE the Hulk character.  Look what he has done to him!  This story gets a D