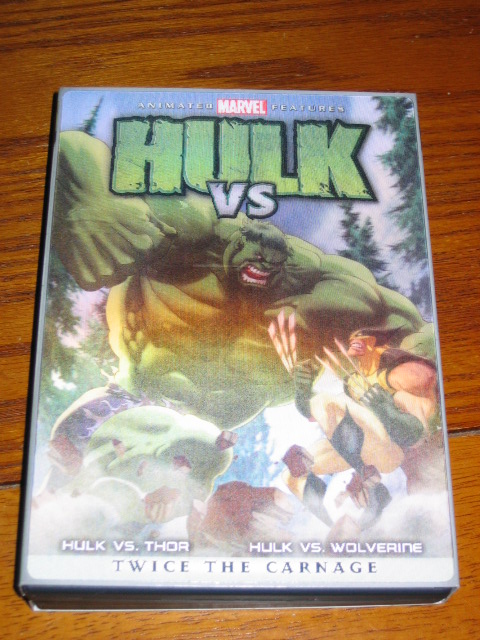 I guess I will start by telling you that I was looking forward to these DVD’s for a while.  I also had to avoid the many, many inconsiderate people who post plot summaries and spoilers WAY before these were released!  I list spoilers – but I at least wait until the thing is actually out!  Or mention that the review is riddled with spoilers!  That being said – if you don’t want to know anything about these cartoons – stop reading… HERE!

Alright, down to the nitty gritty.  My niece liked this cartoon better.  Thor vs. Hulk always had the best fights – and Hulk had his fair share of wins over the years.  This cartoon puts any question about who is stronger to an end.  Let me just say – Hulk humiliates Thor in such a way, I started to feel bad for the Nancy boy.  That’s right!  I called him a Nancy!  Long, flowing locks, pretty blue eyes – the guy is hotter than half the females in the MU – and that’s disturbing.

So, Loki, Thor’s half-brother, who hates his guts, has come up with a way to destroy his brother.  Bring in the Hulk – remove Banner – put Loki’s mind inside, and WA-LA!  Dead Thor!  Thing is – even though Thor is pretty – he’s still a tough mother trucker.  Him and his large hammer can pack quite the wallop!  Well, Loki’s plan works perfectly – until the Hulk becomes so enraged that he breaks the spell and is released on Asgard – a mind-less, rage filled Hulk.  Thor finds his brother to give him a little “talking to” about misbehaving when they discover that Loki had tired of Banner’s whining and has killed him.  That’s right.  Loki killed Bruce.  The jerk.  That means they have to venture down to Loki’s daughter’s realm and rescue Bruce from Hell.  Meanwhile, Bruce is back with Betty and their kids and living the good life.  Loki tells his daughter that she only has half a soul and needs the Hulk’s soul to complete it.  She brings the Hulk to Hell – and learns very quickly that it was a huge mistake as Hulk starts to destroy everything.  So they rip Bruce out of his pretend world and tells him that he needs to merge back with the Hulk.  He doesn’t want to – but eventually they do.  Loki’s daughter (sorry I forgot her name) tells Thor she will let Banner go – but she wants a soul to replace it.  Thor says she can have his – but he’s not going to give it up without a fight – so she takes Loki’s instead.

Tomorrow I will be posting the review of the other movie.  Vs. Wolverine – which, coincidentally, I liked a lot better!