Notice it’s five against one?  Pathetic…

Posted on February 17, 2009 | 4 comments
Let me put it out there first… I was not there – I couldn’t make it.  But I have seen a few pics thanks to statueforum.com and statuemarvels.com that I thought I’d show – mainly just Hulk stuff that we can look forward to.  So, let’s get started:

Here’s a custom Mighty Muggs Hulk – I hate to say it but I don’t think MM would’ve been a hit if this is how they looked.  Obviously this guy has a darker – more realistic paint job and loooooonger legs.  I like the idea of the ripped shirt and the expression on his face is priceless – but all in all – I’ll keep my original.  Here’s a custom Cyclops with a Fruit Roll- Up sticking out of his visor:

Moving on to some upcoming Mini-Mates packs: 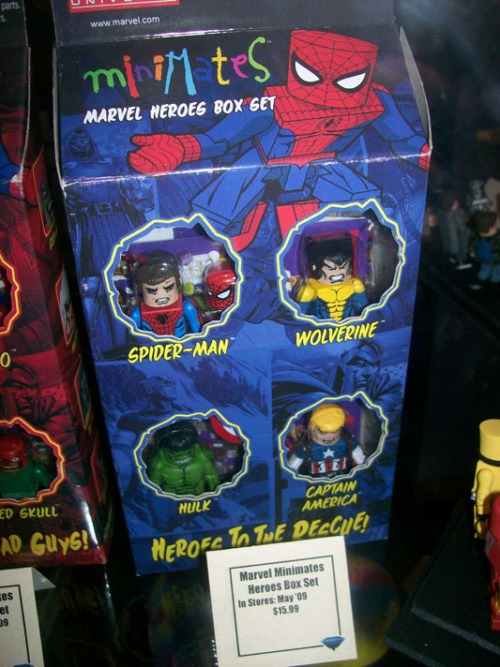 Marvel Heroes – to the Rescue!  We have Spiderman, Wolverine, Cap and Hulk!  The 4 greats of the Marvel Universe.  We should be seeing this around May… as well as:

Some cool Marvel Characters - and a dorky red one...

What looks like a few two packs including Skaar and Ru… Ru… I just can’t even say it anymore.  Ugh.  Let’s just call him the Crimson Fool!  Lastly, I have a couple pics of a Hulk costume – I was going to make a new Ummm… post for this, because it fits in perfectly, but I just thought I’d slip it in here at the end – hope it doesn’t cause anyone nightmares:

Auuuurrrrrgggh! Someone put Hulk out of his misery!