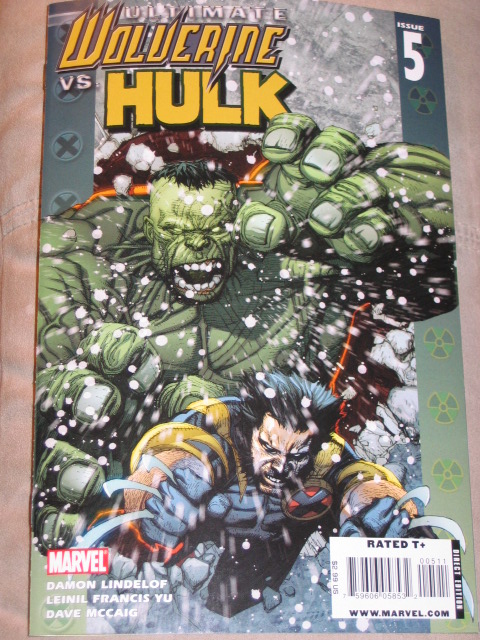 So, here’s the deal with this series. It’s a lot of build up. A lot of build up. We have one issue left to find out if it’s all worth it – but the delay certainly didn’t help how people feel about this mini. It’s trucking along swimmingly – but the jury’s still out on how I feel about the direction this is going. This issue starts out with Wolverine talking to his spirit animal – a Panda – which he scoffs at thinking his spirit animal should be a wolverine… obviously. I liked the Panda’s response in saying that wolverine’s have no interest in being spirit animals. Wolverine himself then insults his spirit animal by calling it “cuddly”. The Panda tells him not to say anything to the man about what he heard Banner say. Wolverine asks who he would tell. The Panda says “the man who cut off your head” and BAM we see Wolverine, or just his head sitting on a table, in a room with Fury. Fury asks Wolverine what happened. Wolverine doesn’t tell – he’s a little more interested in where his body is – and how they knew cutting off his head wouldn’t kill him.

The next part is pretty interesting because he talks about how Wolvie’s healing power isn’t so much about healing and maybe more about surviving.  He tells him that he’s still breathing – only right now he’s breathing through his skin.  That was actually kind of cool – I liked that – because I’ve always wondered what these healing powers were capable of and what the limit was.  Apparently, in the Ultimate universe anyways, there is none.

So Wolverine tells Fury that the Hulk and Betty fought… or screwed each other – he couldn’t really tell – and then they saw the nuke coming.  The Hulk leaped into the air at the last second and Betty shouted that she’s always loved him.  He yells back – but we don’t know what he says… yet.

Wolverine is pieced back together and placed in a cell where he paces around, that is until he smells something – or someone – lurking around the plumbing.  He calls out the mutant and Forge comes climbing out of the toilet.  This mutants “unique” power helps him and Wolverine escape the prison.  Forge creates a collar to subdue a person and Wolverine asks for him to make a “his and hers”.  Then, as Wolverine gets ready to head out to find the Hulk once again Forge asks where he is going.  We see the flashback of Betty screaming out to the Hulk that she loves him and the Hulk shouts back “Meet me in Casablanca!”  As he tells Forge we see that Fury is listening in and hear him order troops to get to Casablanca.

One more issue, just one more – and it looks like it may be a very promising final curtain.  I’m enjoying this series so far – this issue was less exciting but still interesting.  Grade: B-

This entry was posted in Comic Review, Hulk Comics and tagged 2009, Ultimate Hulk. Bookmark the permalink.