I wasn’t even going to bother reviewing this – wasn’t even going to post it – because, and stick with me here, this comic book is a joke!  Do the “fans” of this comic realize just how ridiculous this story is?  All flash – no substance!  I swear I could walk into any Elementary School and ask any of the students there to tell me a Hulk story – and they could do a better job!

Apparently, when you have an all-powerful being - you send in Wolverine.

Why?  Why, you ask?  Why am I being so harsh?  Alright, follow me here… Since the Red Hulk was introduced he has handled every heavy hitter that Marvel has – even killing an Elder – but in this issue we are treated to the biggest insult so far… 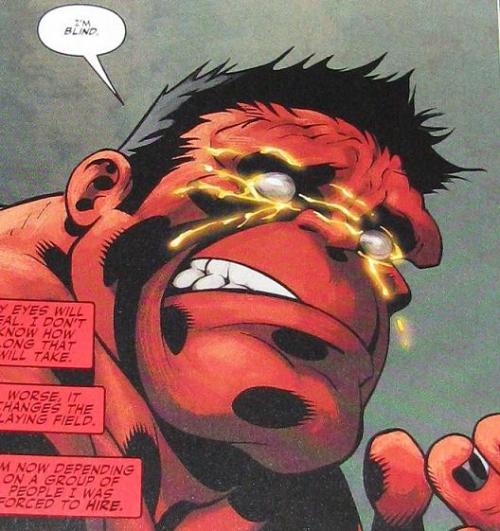 The Red Hulk is blind - and beaten...

The Red Hulk beat Thor – he beat the Hulk!  He beat Silver Surfer!  The freakin’ Surfer!  A cosmic being!  But who gets the better of the Red Hulk in a fight?  Wolverine.  Yup, Wolverine.  Wolverine hasn’t even bested the Hulk – and the Hulk isn’t anywhere near as powerful as the Surfer!  Wolverine tangling with the Surfer?  Don’t make me laugh… yet – a character who beat the Surfer in ONE PANEL was hurt by Wolverine.

I can’t even begin to review this drivel… oh, wait – here it is… the X-Force battles the Red Hulk’s team until Deadpool and the Punisher blow the Diner up – then the Wolverine is knocked out by the Red She Hulk who finally makes her appearance… – oh wait, I forgot – Wolverine sliced the Red Hulk’s eyes, blinding the guy… and the Red Hulk’s inner monologue reveals he’s starting to feel bad about his actions in the last few years of comics – this is the set-up for the Red Hulk to become the Anti-hero… excuse me while I yawn

I feel like I was ripped off.  Even before when I bought these comics I felt like it was going to go somewhere – I was waiting to see what happened – but I think I have finally lost all interest in this crap that Loeb continues to put out.  Grade: F

This entry was posted in Comic Review, Hulk Comics and tagged 2009, Hulk #15. Bookmark the permalink.