I needed to take a break from reviewing comics – although it’s hard this month with so much coming out! But I also wanted to show you a few new pieces I’ve collected. This piece has a bit of history from the Statue Forum – there is another poster there who’s favorite character happens to be the Bi-Beast.  He actually sculpted this beauty and Bowen picked it up to release!  Personally, I love the character!  I was psyched when Bowen said there was a bust forth coming!  So, congrats Alex de Souza Moraes on creating something so impressive Bowen even took notice!   And luckily, with these being so limited, I was able to snag one with the help of my friend Corry and Zapp Comics!

The Back - and his leopard spots!

This bust is HUGE!  As it should be compared to the Hulk – I know there was a smaller version of the Bi-Beast that appeared later – the one that fought over the She-Hulk and appeared in the early 400’s – but you’ll forgive me if, when I think of the Bi-Beast, it’s the larger than life bad-ass that appeared early on in the Hulk’s run.  And with this bust being limited to just 500, you should consider yourself lucky if you do get one!  I am still shocked with the beauty of the paint application, the sculpt itself and the sheer size of it! 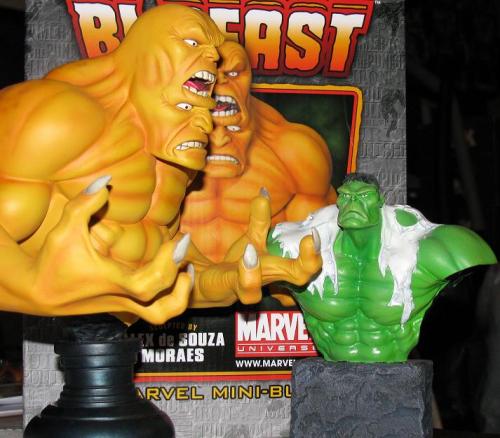 He towers over the original Hulk bust! Holy Smokes!

Bowen has met both praise and criticism for his array of obscure characters that he produces.  I for one am both amazed and thankful for the amount of characters Bowen puts out – who else would spend the time to release a Doc Samson Bust?  How about a Full Size Abomination?  No one!  No one else!  How about a Ring Master bust?  Yeah – no one would touch that character – no one, except Bowen!  So thank you Mr. Randy Bowen for not only creating such beautiful renditions of the classic, popular characters – but also taking the chance on B-Characters such as the ever cool Bi-Beast!

This entry was posted in Hulk Statue/Bust and tagged 2009, Bi-Beast, Bowen Statues. Bookmark the permalink.