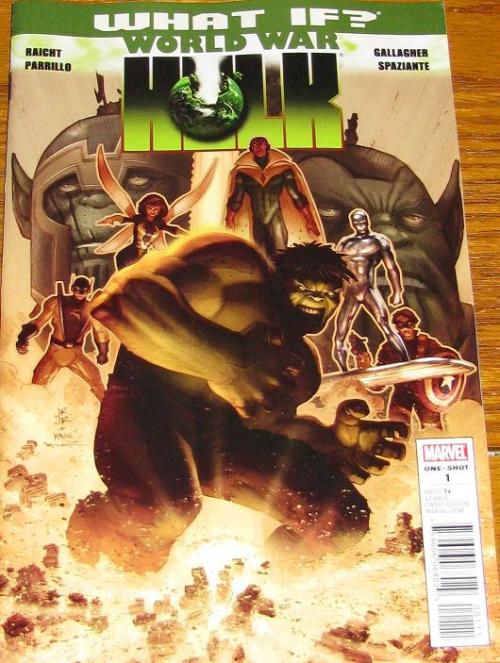 This What If? is one of the better What If? stories to come out including the Hulk.  The first story takes place at the end of WWH where the heroes are desperate to take out the Hulk in any way – and as Tony releases the laser from the satellites they find… it works and takes the Hulk out.  But it also kills the Spider Woman *Skrull Queen*.  This puts the very well fed Skrull Commander in charge – and he believes that the Hulk is the green prophet.  He believes that the Hulk’s actions are actually signs that are telling him now is the time to strike and to make the “blue planet” their new home. 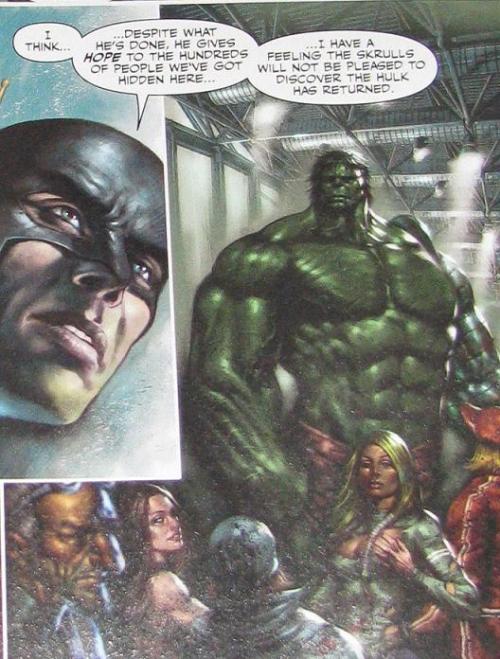 And strike they do – they release a fury of attacks and kill millions – humans, heroes and mutants alike.  After a few months the Vision android returns to the site of the WWH final battle and finds Bruce.  He’s poisoned and just waiting to die.  The vision tells Bruce what has been going on, tells him that they could really use the Hulk’s help.  Bruce finally agrees and tears through the Skrull army as easily as he did the heroes in WWH.  As the Hulk takes out more and more the remaining heroes begin to gather and create an Army – they call themselves the Avengers and are preparing to take their planet back. 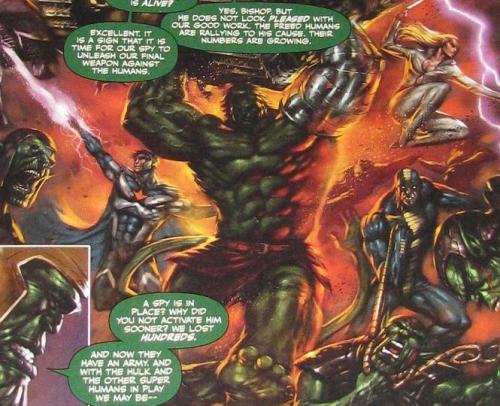 Hulk taking on the skrulls!

But the Skrulls have a plan of their own.  A spy.  A bomb – in the form of Giant Man.  See, the Wasp is actually a Skrull – and as Pym professes his love she reveals herself – and also reveals that Pym a living bomb and he detonates.  He destroys the remaining heroes – except the Hulk who summons the Surfer.  Hulk demands that the Surfer bring Galactus to devour Earth.  Surfer refuses… at first – but with a bit more urging from the Hulk the Surfer agrees.

The Hulk asks the Surfer for a favor

The Skrulls don’t understand where they went wrong.  Why their new home, much like their old home, is being destroyed by Galactus.  But the Hulk does not perish along with his home world – instead Galactus tells the Hulk that his rage is perfect to become his new Herald.  The Hulk asks only to let him forget – and Galactus delivers.  The New Herald – the World Breaker! 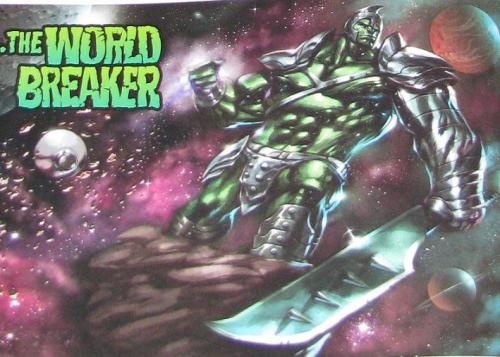 I liked this story – but everyone seems to address what the Hulk did in almost destroying the Earth – but not one writer has addressed the fact that Reed, Stark, and the others were responsible for the Hulk wrath… but the story is still pretty excellent: B+

The next story is about What If Thor came back at the end of WWH?    Funny enough – it does address that Stark, Reed and others are to be held responsible – but it was really, really bad – one of those “happily ever after” kind of stories – one of those – let’s all help and get along and forgive everyone kind of endings.  I won’t bother going on longer than that about it.  Grade: D

I found this while searching out Kirby inspired Hulk images.  Pretty sweet site.  Click the image to be brought there!