There are a few great things about this set – and I will say this – one of the best things is that they have both a Green Hulk AND a Grey Hulk card.  1990 was certainly a big year for the Hulk – that saw the return of the Green Hulk after years of Grey Hulk stories, even if it was for one issue – and the end of the year was the beginning of the merged Hulk era! 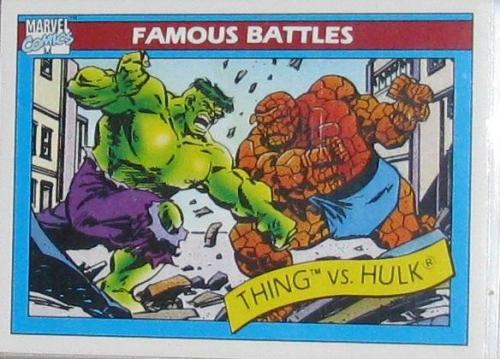 There are also a few “Battle” cards – Hulk vs Thing, Fixit vs Spiderman, Hulk vs Wolverine.  Again – I will say it again, I don’t get what was so great about the Wolverine vs Hulk fight – I mean, I know that’s where the world was introduced to Wolvie – but really – most people don’t even know what happened in the fight.  Mainly because the truth is – Wolvie was beaten and inconsequential.  And the Fixit/Spiderman fight?  Another boring fight!  We’re not talking the Cosmic Spiderman/ Grey Hulk fight – because that one was awesome! 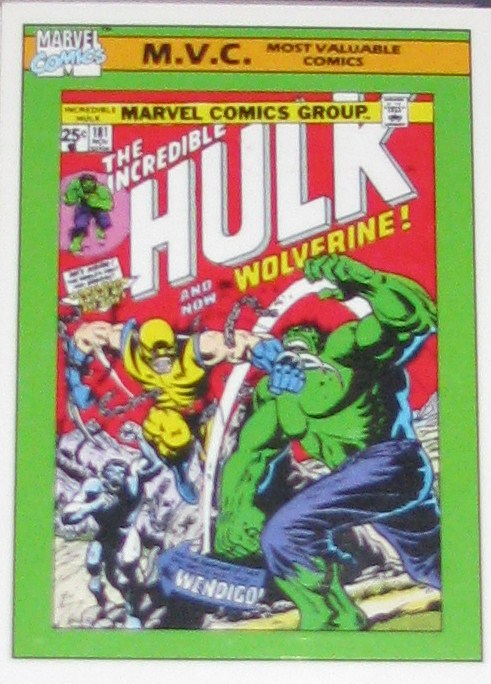 Alright, let’s move on.  There was another small series of cards dubbed the MVCs: Most Valuable Comics.  Some of them actually were the valuable comics – while some were recently released and hyped as “going to be valuable”.  Lastly, the last half dozen cards were “joke” cards featuring Spiderman interviewing other heroes. 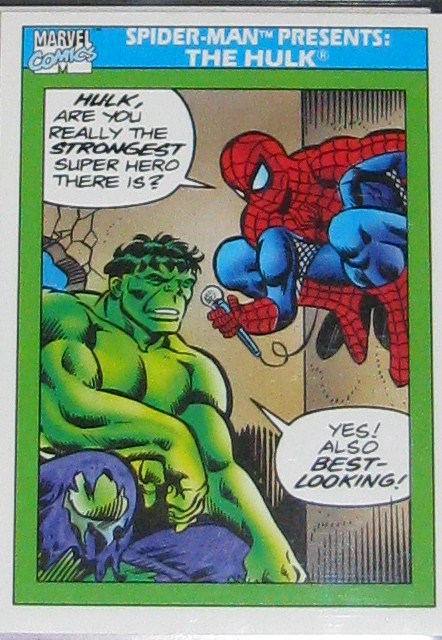 Oh Spiderman - you're such a ham!

The chase cards were 5 holograms – off the top of my head here – Magneto, Cosmic Spiderman, Punisher, Wolverine and Spiderman vs Green Goblin.  Nothing Hulk here – so I didn’t post pics – but I do have a complete set – including the Wolverine hologram which was missing when I got the set.

And – before anyone asks – yes, I will review Hulk #613 this week.  First I have to read it!  Expect it on Wednesday!

Back of the Card