Alright – here is the other new release from MU.  I have this week of posts planned out, and yes, I will make sure I post the review for the new Hulks issue by the end of this week, but I want to make sure to show off the new MU figures first.  Seeing as the new wave is just hitting the shelves and wave 11 hardly made an appearance these figures are still a novelty to see.

There's the guy who almost stole Betty away! 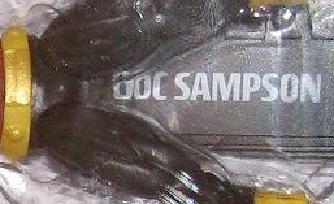 The best thing about the Samson figure?  The little base that the figure comes with says “Sampson”.  That’s right – they spelled the name of their own character wrong!  And while we’re on the subject of these bases – WTF?  The figures now come with just bases?  I know the cards/SHEILD file was cheesy – but at least it was something!  And now that they are trying to raise the prices on these figures – the absence of the sparingly simple extras is insulting!

One of these are for Steve Yarish - One of them is mine!

If Marvel expects fans to pay this much for these figures – we should get something worth our money – the WWH is an outstanding figure – but even  I  have a hard time justifying a $10 price tag for it.  This figure is mediocre at best.  But good luck to all who wants one!