Some of the con goodies!

So, where were we?  Oh yes, Greg Capullo – wicked nice guy!  Now, onto the next nice guy I met – a legend in the business – one Mr. Joe Kubert.  His table, along with J. Scott Cambell and Art Adams were on the outside of where all of the other artist/vendors were.  When I walked out there I saw that Cambell’s table was mobbed.  Unfortunatley, I did not see Adams table either but I did see Kubert who was talking to a young boy dressed up as Spiderman.  He smiled, shook the boys hand, and signed his comics.  When he walked away Joe looked up to me and smiled.  His smile is enormous – the kind that is infectious and you can’t help yourself but smile back.  We discussed his work for a bit – I mentioned his son’s run on the Hulk and he shook his head to acknowledge that he remembered and we talked a bit more about his contributation to some of his son’s issues – most notabley this one. He smiled again and nodded.  I pulled out the drawing pad and mentioned the jam piece.  He quickly said “I’m not sketching today.”  And you know what?  He was a gentleman about it and it was still a pleasure to sit and talk to him for a bit.  He offered to sign the page but I didn’t think it would fit with the motiff – just a random signature would not look right.  I thanked him again and told him that that was okay.  He said “Alright, are you sure?” he held the pen up and smiled huge again – which made me laugh.

Kubert - what a great guy

Even though Kubert was a delight to talk to I did walk away from the table with a bit of disappointment.  I mean, how could you not?  That would have been a HUGE score – the jam piece would have reached legendary status!  But, it was time to get over it and move on!  I walked to see if Dexter Vines arrived… but he had not.  It was now 12:00 and quite a few artists were still not at their tables.  I checked Norman Lee’s table – same results, not there.  I immediately went to check if Frank Cho made it to his table yet… 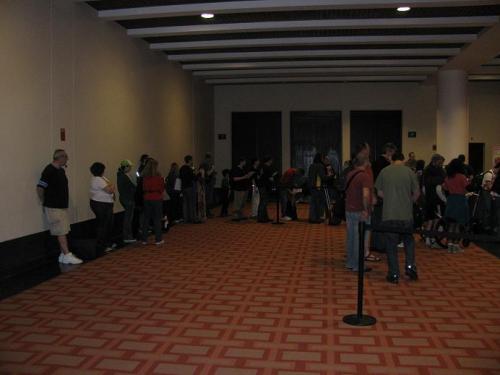 Oh yeah - here's the lines for Adams and Cambell...

And I got quite the surprise – Khoi Pham was next to where Frank Cho was supposed to be – but wasn’t yet!  I walked up and began to discuss the Chaos War and Herc and moved onto his style and method.  I brought out the jam piece and he said “Yeah – I can add to that, let me see it.”  He began to work and we began joking around – I asked him if he always wanted to be an artist – he said he grew up in a very traditional Asian family and he was supposed to be a lawyer.  In fact, he continued, he actually WAS a lawyer a before he worked for Marvel.  A fact I was not aware of and probably wouldn’t have known if Frank Cho was not late.  See, I know that Frank Cho is a long shot as far as getting any kind of sketch from.  He has a reputation at cons for not sketching – so I didn’t have high hopes anyway – but I was going to try.  If I had tried and Cho said no there would be no way O would just turn to the artist next to him and say, “Alright, then how about you?”  I don’t think that would come off well – so you see, it was lucky Cho was not there – because I got this:

Pham delivered the best Hulk yet!  I was suddenly re-energized!  Now it was time to go check out the 2 commissions I had set up before the show.  Chris Uminga and Matt Fletcher were both going to do a Hulk bust for me.  These two guys have such distinct styles and are both incredibly nice to chat with.  I couldn’t wait to see what they came up with.  But I needed to move on as the pieces were not done yet…

The page is really coming along!

Dexter Vines was just reaching his table!  I walked over and struck up a conversation.  This guy is a talented inker – one of the best and FAST too!  But when he first arrived and I brought up the jam piece he said he was interested in adding to it – but to come back.  His exact words were “Let me throw some breakfast in my face first!”  I needed to move on.  Let me just take some time to comment that the new space was pretty spectacular.  Last year the space was a bit confined – but this year there was a ton of space to move around and be comfortable.

With some time to kill before Vines was going to add onto the jam piece I walked over to Roger Andrews table.  For anyone not in the know about Roger Andrews – not only is he a fantastic artist with a unique cartoony style – but he is one of the few artist who remember my face each time I see him.  When I start walking over to his table he looks up and a grin appears while he stands up and greets me “Hey man, how’ve you been?”  We had an excellent conversation about inking pieces and the value that differing the thickness of the lines really brings.  I asked about the jam piece and he immediately went to work.

With the jam piece really rolling now – it was time to see if Frank Cho ever showed up… was he there this time?  Come on back tomorrow to find out!