Love the storyline or hate it (and for the record, I totally hated it) the idea of having a figure based on this comic was a great idea – a combined Green and Red Hulk figure?  There was LOTS of buzz around it!  Of course, most people who did score one seemed to immediately list it on ebay – for a profit, of course.  Hasbro announced that they almost sold out of the figure – but still had enough to list on their site for a few hours.  Me?  How did I score one?  Read on…

It was because of the generosity of one of the readers of this site that I was able to show you the one in this post – thank you Tbear! – but I was also contacted by a member of the SF a few days later that he also picked one up for me!  An extra?  Sure!  Thank you!  Not even a couple of hours later, my friend Corry, from Zapp Comics, let me know he also had one reserved for me.  So yes, dear readers, I am a fortunate man – one with friends in all the right places… for Hulk collecting!

As for the figure – it’s a pretty decent variant – one that, I think, will be sought after.  Right now there are plenty on ebay – but when those dry up watch as the prices rise.  Thanks to all who were able to assist me in getting a figure – like I said – at the moment I only have this one to speak of – but I have faith that the others will land in the Hulk room.  Just to let you all know, I will be opening one – and the last is already spoken for by a Hulk fanatic I am helping out.  Yes, one hand washed the other – or in this instance – One figure is passed from one fan to another! 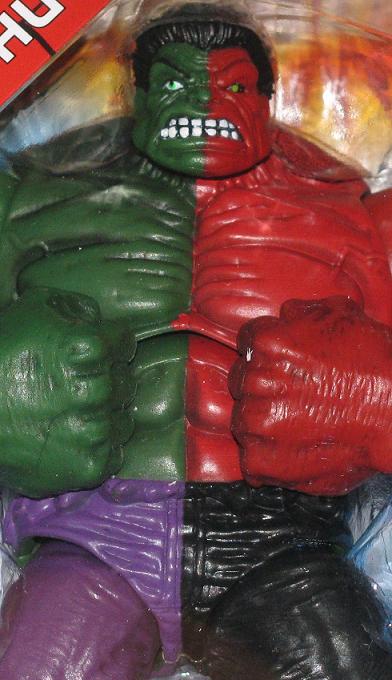 This entry was posted in Green Hulk and tagged 2011, Marvel Universe. Bookmark the permalink.