Aaron plots for the future with tired premise…

For some reason – maybe I just wasn’t paying attention – but I thought we were getting full sized Muggs again.  So I was a little disappointed when I saw what we were actually getting.  That being said – I had to change my perspective and review what we have rather than what I thought I was getting!  So:

The Positive: I know these muggs aren’t exactly known for their sculpts because they all come from the same mold (that’s part of their charm, IMO) so these little guys have to be based solely on their paint-ups.  One of the best things is to see that they didn’t double dip.  Each little fig has a new design!

Similarly, the singular Hulk has sort of a classic, Kirby feel to it.  The troglodyte, inquisitive look on his face screams silver-age to me.  The olive color isn’t exactly my favorite – but it looks good on this little guy. 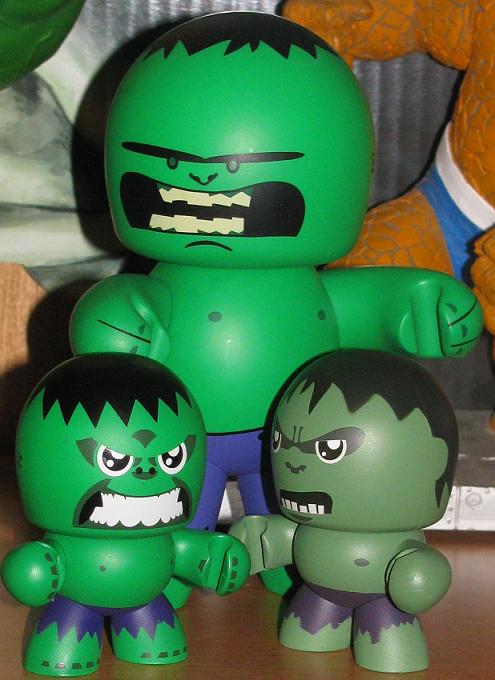 "Honey! The kids are acting up again!"

Abomination has a decent design as well – believe it or not they did paint on ears – he looks very Killer Croc-ish – but without adding to the sculpt there wasn’t much they could do to avoid that.  I am psyched about these 2-packs because it gives us an enemy for the Hulk – something the original Muggs never gave us.

Hulk has that sort of "I crapped my pants" look...

Like his ears are pinned back against his head!

Nevermind the price for a second, I like these new additions to the Muggs collection – the smaller size makes them cuter – I just really wish they were able to add ears onto the Abomination rather than just painting them on.  Painting them on doesn’t really help distinguishing the Abom from some other monsters – and it gives me a strange unfortunate deju-vu feeling from the ear-less Abomination from the 2008 movie.

Conclusion: If you don’t mind being fleeced on the price – which obviously I did not – then these are definite pick ups!  Grade: B+