If there is one company I will always support – it is LEGO – yes, the sets have gotten astronomically high but the way I look at it – they are worth every penny.  LEGOs never go out of style – they never lose their appeal – they never go bad – and amazingly, they are getting better with age!

Hulk, Hawkeye, Loki and Thor come in this set!

Yes, LEGO knows what they are doing when it comes to creating a superior product!  We can rejoice too – because they are FINALLY releasing Marvel LEGO sets now!  As I was building this set I realized how smart Lego is in making all these sets.  Not only are they well put together with brilliant little tricks to make them easy to play with – but they are pretty impossible to pilfer. 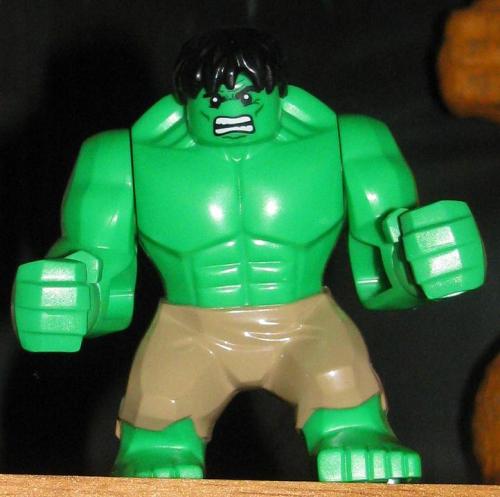 We finally get a LEGO Hulk guy! And he's HUGE!

See, the Hulk figure may come in a seperate bag – but you can’t connect his arms with a couple of little connector pieces!  Brilliant way to lessen the chances of theivery!  Thor’s body is in seperate bags – as well as Loki and Hawkeye’s appendages.  Thor’s hammer proved to be the toughest to find – but it was in there!

I had a blast putting this together – I think the last time I put a set together was when they first started to release Star Wars sets and I built the Milenium Falcoln.  As cool as that ship was – this set is cooler!  Why?  Because, when you press the lever in the back of Hawkeye’s jet – the top pops off – like he was ejecting out!  Not to mention the Helicarrier part has all sorts of little pieces to move and snap off – like Loki’s holding chamber – it’s just a very well thought out and put together set!

I have nothing but respect for the LEGO company – and seeing as this is the first set I have bought in close to a decade and STILL have glowing reviews – that says a lot!  I can’t say enough positive things about this – except go get this set today!  It absolutely rocks!