Meet the New Hulk – Same as the Old Hulk? 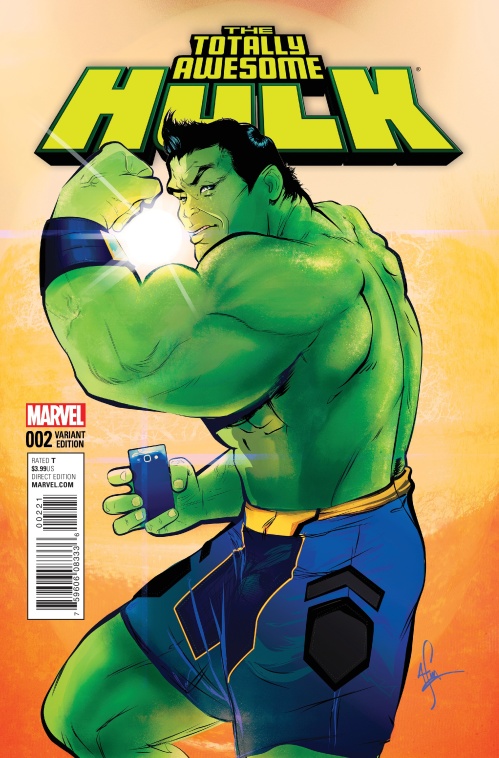 I wasn’t going to bother reading the new Hulk series so why would I bother seeing how the series is selling, right?  I mean, why would I even care?  Except, the curiosity got the best of me.  I wanted to see how the Totally Awesome Hulk, with the selling power of Greg Pak and Frank Cho – two superstars in the business – compared to the recent Hulk reboots of the past.  People might try to say “But this isn’t really a reboot.”  Yes it is.  It’s another reboot in a series of reboots in a time where reboots have gotten out of control.

Let’s start with the numbers though… TAHulk sold 74,471 units.  Pretty impressive, right?  Well, not really.  Not really at all, actually.  Considering that the last time Marvel rebooted the Hulk series with a brand new Hulk it sold almost double that.  Yes, in 2008, when the Red Hulk first made his appearance in Hulk #1 it sold a staggering 133,895 units.

How about the various reboots after that?  Well, Incredible Hulk #600 (you remember, the reboot disguised as a return to the original numbering?) sold 92,282 units.  One could only think the TAHulk could reach those numbers, right?  Well, it didn’t.  It also didn’t didn’t match or beat the numbers for the 2011 reboot (106,472) or the 2012 reboot (118,200).  It seems the only reboot it did beat was the last one – the reboot of Mark Waid’s Indestructible Hulk to the non-descriptive Hulk title – the reboot that everyone rolled their eyes at.  The reboot that all the readers out there knew was a simple cash grab and even the creators said they were confused by.  The TAHulk did beat Hulk…. but not by a whole lot.  Less than a thousand units, in fact.  While the TAHulk sold 74,471 units Hulk had sold 73,551.

What does this say?  What does it say about these new readers that Marvel wants to snag?  What does it say about Marvel’s decision to diversify their universe and turn the Hulk into another character all together?  Well, truth be told, it’s too early to tell anything.  Who knows how the readership will climb or fall.  One thing is clear though, if Marvel was looking to cash in on all these new reboots the way that DC did with their New 52 it isn’t going as planned.  The sales for their #1’s haven’t really done much at all.  And all of this was off the heels off the super successful Secret Wars (which I didn’t really enjoy all that much – but it sold like gangbusters).  Maybe it’s because Marvel had prefaced this new set of titles with years worth of useless reboots before it?  Maybe Marvel tripped up by cancelling all titles while Secret Wars waged on?  Who knows for sure – all we can say for sure is that if Marvel was looking to grab new readers they might have done so at the expense of the old readers who didn’t bother picking it up.  Either way, for a Hulk #1 the Totally Awesome Hulk does not have the numbers to back up its adjective.

This entry was posted in Hulk News. Bookmark the permalink.

2 responses to “Meet the New Hulk – Same as the Old Hulk?”