Atkins (You’re Doing it Wrong): A Year Worth of Cringe-Worthy Hulk Moments – Week 9

Let’s have a little fun and discuss some of the more graphic, violent, sad, or just plain awkward moments that have plastered the Hulk history.  Be it a passing meeting between spouses of a gruesome scene that nobody saw coming – this year I’ll have you squirming in your seat!

There are two types of people in Hulk lore – those who see the tragic state of Dr. Banner’s… condition and those who see him and want to harness the unimaginable power for themselves.  The latter are the people to watch out for.  Such is the case of Hubert St. Johns – a man who has hired two unhinged scientists to not only capture the Hulk but to figure out a way to give him the gamma power he seeks. 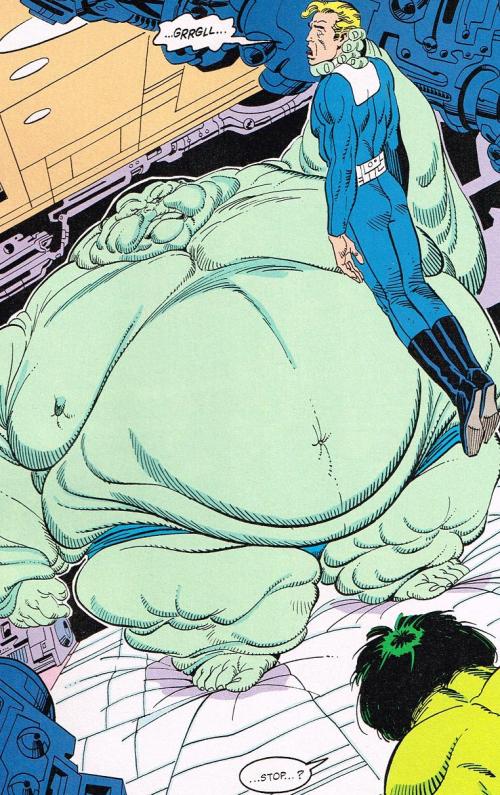 He gets what he wants… as you can see – but of course gamma power, being so unpredictable (or at least it was until… say… 2008), does different things to different people (or at least it did… until… say 2008 and 2015) and Mr. St. Johns received all the gamma power he wanted – and more – as it accelerated the fat in his body to a terrifying amount.  Notice the floor buckle where he stands.

His dream is short-lived of course as he begins to choke on his own bursting insides and he tumbles onto the two scientists who helped him create the monstrosity he’s become.  Giving us a complete but pretty disturbing ending.  I can’t get the thought out of my head about that poor woman trapped under a ton of sweaty flesh… suffocating her.