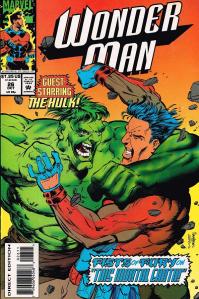 This is such a fun little addition to the site let’s see how long I can keep this going!  This month we’ll discuss the very forgettable and very odd guest-shot in Wonder Man #26 and #27 from 1993.  Hulk was still part of the Pantheon and looking to fight anyone threatening world peace.  Hence, him coming to defend the Islamic Republic of Kanem from Wonder Man.  Simon Williams was being framed for destroying the Agrimax – a machine that could end hunger in the third worlds.  Of course, Hulk didn’t know this and immediately comes to put the smack-down on the former actor/superhero with a publicity problem.

While the two trade blows and, astonishingly, Wonder Man is keeping up with the Hulk.  Hulk’s taunts over the fact that Williams is in possession of powers that he doesn’t even know how to use (Simon did get a bit of an upgrade before this issue) and that this is not the first time the Hulk has encountered a bumbling hero like this.  After the dusts settles between the two, who now realize they shouldn’t be fighting each other, they decide to team up and go after the real enemy… an enemy who has been watching the whole time.  An ill-named duo, the Furor and the Plan Master!

The following issue is pretty action packed and hilarious as the Hulk and Wonder Man reveal the traitor, save the Agrimax, pound on the Furor and even use the bulky foe to crush his partner/father? By the end of the issue the two disappear in a flash of light and Wonder Man heads home – only to find out that his girl had her brother, who she had custody of, taken away from her because of Williams involvement with them.

While the art is pretty terrible and the names of the big bads are laughable it is still a fun couple of issues.  The original meeting of the two heroes where they throw tanks at each other is worth the buck that these two will set you back!  The only real mention of the Hulk’s classic behavior is when Wonder Man quips about the Hulk getting stronger while he gets madder.  Find these issues, if you can, and enjoy some real 90’s fun! 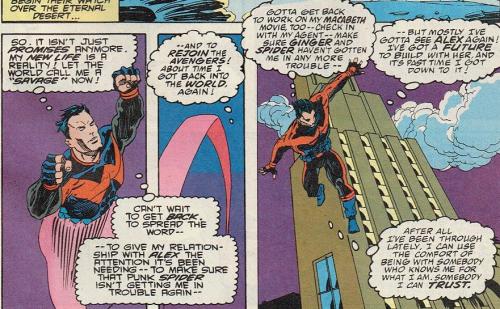