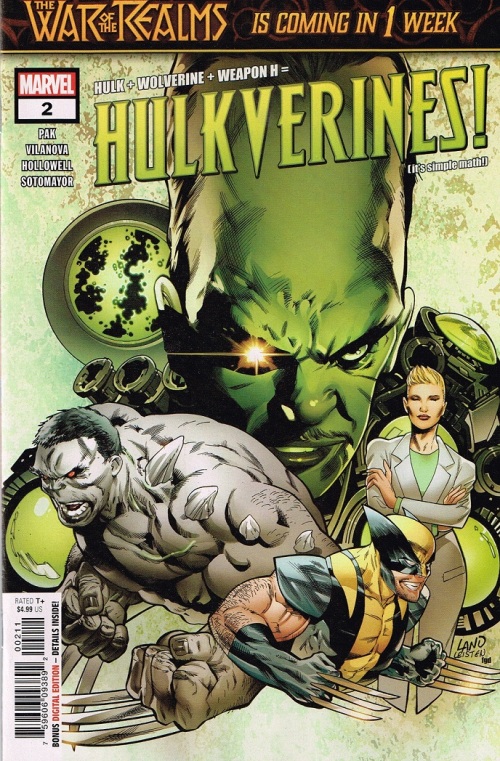 Has anyone seen Greg Pak’s legacy as one of the best Hulk writers ever?  It continues to disappear… and this miniseries doesn’t seem to be helping.  I was sort of hopeful in the last issue that, despite the idea being sort of silly, it would be a fun ride that’s worth the read.  With this issue it seems to be heading in the wrong direction.

The issue begins with Clay’s family heading underwater to safety.  Clay is stuck in the forest going toe to toe with Logan.  They slice each other up pretty good –  Clay unable to heal or Hulk out because of the Leader’s virus.  The Leader is standing – but not really – with Shadow Base.  When Clay is ready to attack the Hulk comes slamming down and stomps him.  He then turns his attention to the Shadow Base soldiers.

The Leader, actually standing far off from the action, sees Wolverine and sends his humanoids to kill him.  Unfortunately, Dr. Alba has Humanoids of her own and they dispatch the Leader’s army pretty quickly.  Leader and Alba have a quick face off of who the smartest evil genius with the two realizing it would be better to team up.

The heroes are continuing to bicker until Hulk jumps off – but, this being the Immortal Hulk, the sun reverts him to Banner and Bruce slams into the lake and sinks.  Logan and Clay come to his rescue and bring him into the underwater hideout.  That’s when everyone meets Clay’s kids:

Meanwhile Leader and Alba have decided that the best course of action is to make everyone a Wolverine/Hulk hybrid.  Because that makes a lot of sense.