Before I begin with the review, I know I usually highlight the regular cover – and Alex Ross knocks it out of the Park again, as usual, but I loved the classic Abomination cover so much I had to post that one instead!  Our regular artist Joe Bennet is back and we have been given some gorgeous visuals to drool over in this issue.  The narrative keeps moving forward with Shadow Base forming a battle ready crew to take the Hulk down – but after Fortean’s attack on Alpha Flight, even taking out the leader, has he bitten off more than he can chew?  What will Alpha Flight’s retaliation be like?  Will they take out Shadow Base before they can take out the Hulk?

With Sasquatch out of the picture the rest of “Gamma” Flight is looking to take payback against Fortean, especially for crossing the line with moves like shooting Creel up with morphine!  Back at Shadow Base Dr. McGowan is tearing Fortean a new a-hole over his actions as well.  She’s especially disturbed by Fortean’s reckless actions resulting in him becoming the new Abomination!  Fortean is clearly out of control and he’s only getting more obsessed and harder to reach with simple reasoning!

Meanwhile, Betty, Banner, McGee and the Jones corpse are all chilling in a hotel room where Betty refuses to speak to Bruce outright and Jones has started to show signs of improvement from “dead” to “not as dead.”  With Banner unable to handle the ongoing saga that has become his life it’s Joe and McGee who have a heart to heart.  The convo is cut short when Betty alerts everyone to Jones’ apparent resurrection.  While he has certainly looked better as least he will save money in night lights.

Jones remembers everything and knows exactly where Shadow Base resides.  Back at Gamma Flight, the team looks to make a move on Fortean as quickly as possible so that they don’t see it coming.  Unfortunately,  Fortean has psychics on the payroll and he sees everything that’s coming!  They already have the team surrounded when they transport into the base.  Fortean displays his smugness and takes a special pleasure in explaining how prepared he is – until he realizes that he doesn’t know anything!  The Hulk, with his crew of monsters in tow, break into Shadow Base bringing the fight to them! 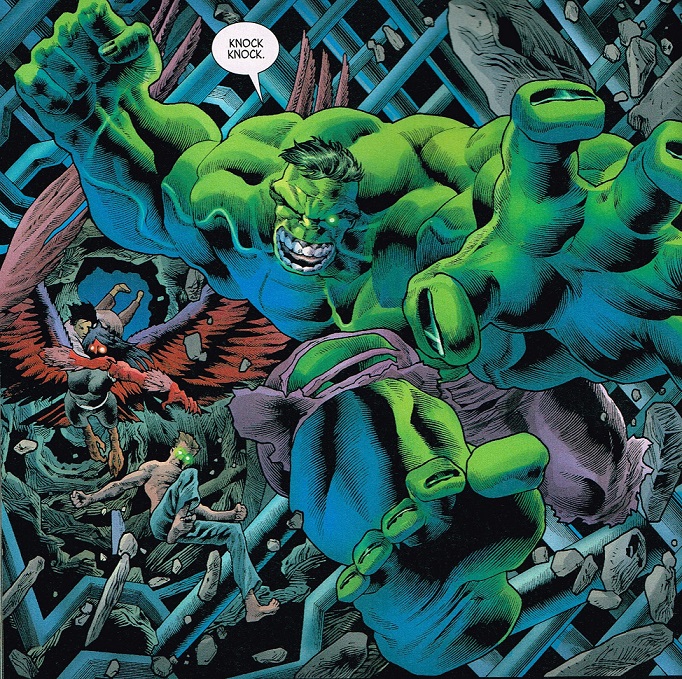 Next issue should be a real doozy!