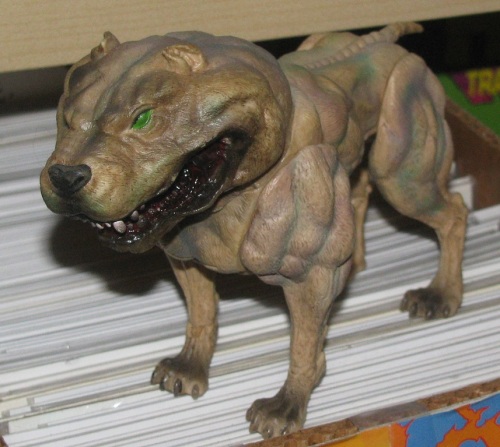 Here we have a figure that I figured I would never, ever think would be a part of the Hulk collection.  It’s amazing, really, after all the years when an event can occur that totally offers you something you’d never expect to have.  If you’re on the Facebook page for this blog then you might recall seeing a video at the end of March where I showed off an entire bag of Hulk figures given to me by a good friend, and a fan of this blog, Gammapup.

He had been clearing some space in his storage containers and came across these bags of loose Hulk figures.  Trying t think of what he could do with them he had the generous thought of offering them to me. Anyone in circle I keep will tell you right off I am a sucker for Hulk swag.  If anyone offers me some great Hulk pieces it’s hard for me to say no!  Well, Gamma allowed me to take these figures off of his hands and I had a blast going through the bag seeing what was inside.  One of the first things I noticed was the Hulk Dog. 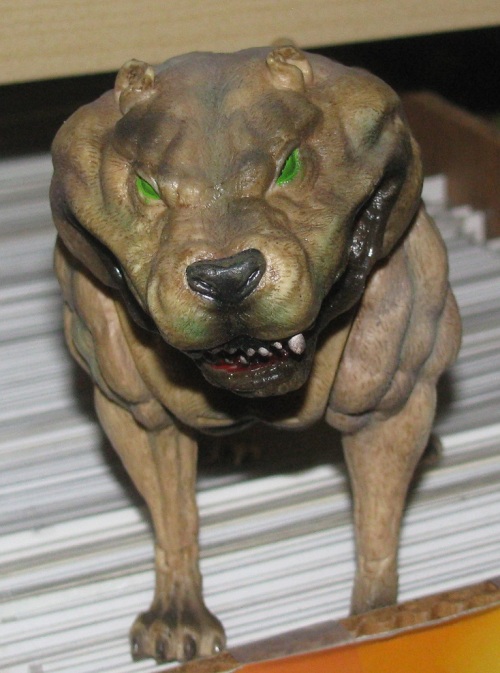 Sure, the 2003 Hulk movie is pretty hard to watch in comparison to the masterpieces being released today, but one of the easiest moments to remember is the Hulk Dogs.  There were 3 puppies in the movie that were “hulked” out and sent after our jade giant.  One of the dogs, an odd choice but a secret delight for the director, was a poodle.  But this was the only Hulk Dog put to plastic.

When these figures were released, predictably, the Hulk dog was a peg warmer.  It clearanced out of the stores and it wasn’t until much later when collectors started desiring this piece to complete their Hulk runs.  Unfortunately, these are so scarce that the puppies on or off card command a pretty steep price.  That’s one of the reasons I never thought I’d have one in my collection – I wasn’t willing to pay the enormous price for a figure like this.  Well, once again, my good friend Mike came through with pieces he was dumping from his collection, adding to mine the, admittedly, pretty cool Hulk Dog.

It is a rubbery figure that you must make sure not to damage as the skin can easily rip but if you squeeze the legs together you can make the dog growl.  The neon green eyes – with an evil glow – captures the dog in the movie so well.  The sculpt is done so well too – the bulging muscles actually make this dog more menacing looking than the creatures did in the movie itself.

I already showed my affinity for this character when I blogged about the newer release – but this animated sculpt comes from the 2003 Clerks Inaction Figure line that, thankfully, covered most of Kevin Smith’s movie up to that time.  Just like the description suggests, this figure does not have any articulation but it does sport a Bluntman and Chronic comic!  Although, it does not seem to be in a bag or board.  Bloody Savage. 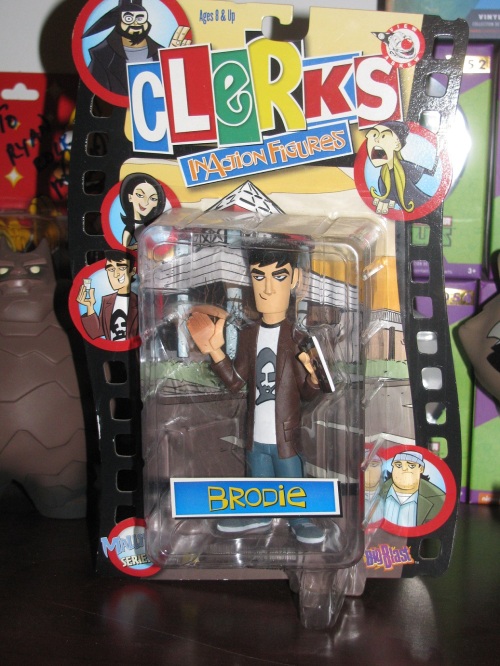 Have I ever mentioned that a lot of merchandise came out when the first Hulk movie was released?  The Hulk still hold the record for the most merchandised Marvel movie.  There was THAT much stuff!  Things that I am still finding to this very day… like this piece right here.  A laser print that was an exclusive to Tower Records.  Oh Tower Records, how I miss you! 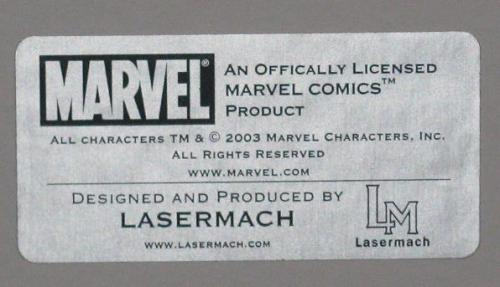 I was able to purchase this after finding it adorning the walls of Rubber Chicken Comics.  A comic shop I don’t have many opportunities to visit but, thankfully, did get a chance a few weeks ago.  While I picked up quite a few comics I was also able to snag this beauty.  Limited to only 1000 (I wonder of the other owners visit this site – let me know if you also have this!) mine is #346.

This image reminds me of the classic Bob Larkin Hulk here:

In a way, the most memorable thing from the 2003 Hulk movie might just be the inventive figures they released.  This figure is both hilarious in nature and very creative.  They tube with the translucent, half Hulk is the best part of this package deal.  Nothing against the Eric Bana inspired Bruce Banner figure – but, by nature, Bruce Banner figures aren’t very exciting.  This Banner, sans any kind of lab coat or ripped pants (although he does sport a nifty security badge and lanyard), is better dressed than most of the figures of this character.  It at least shows he has some fashion sense matching his belt to his pants – and even the undershirt!  His haphazardly parted coif shows he knew what was cool back in 2003.  He had sort of a Jimmy Fallon (when he was funny) kind of look!

I will admit that I never tried to collect the 2003 Hulk movie line figures.  The market was flooded with everything Hulk and there was so much to sift through that I almost shut down.  I decided not to collect the Hulk figures – not to mention after seeing the Hulk movie it wasn’t like to wanted to rush out to collect them.  Especially this figure – David Banner, played by Nick Nolte in the movie.  I wasn’t sure exactly what they were going for with Nolte.  Was he supposed to be the Absorbing Man?  What could have been a real brawl at the end of that movie turned into a very messed up water aerobics event.

The figure was sitting on the shelf of a specialty toy store.  I saw this one and another – which will be posted at a later date – and I thought for a minute on whether or not to pick it up.  Ultimately, buying it won out because (the price really decent) David Banner might be one of the better underrated Marvel villain of all time.  That, and who can ever forget the Nick Nolte’s crazy rant at the end of that movie!

Here is a little example of why ebay is so vital to us collectors.  This little guy is part of a larger set – that set being a bit more money than I would want to spend just to acquire a single little Hulk chess piece (2003) – so, sure enough, with a few searches on eBay I was able to track one down.  And for just a few bucks to boot! 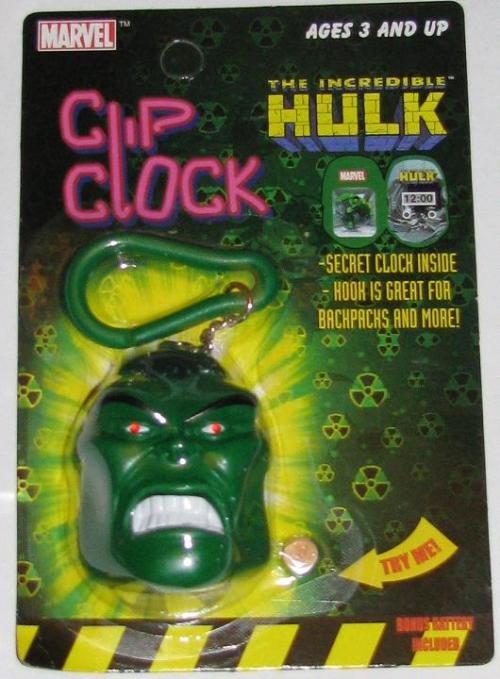 So, yeah – it’s been about a week, maybe more, since my last post.  Well, it certainly isn’t due to having stuff to post – and I will tell you the absolute truth – I have been working on a few posts that are pretty involved and pretty long – but really fun.  So, bear with me – posts may not be coming EVERY day but I will post more, as well as getting the reviews out for the new books.  And yes, I picked up the new MU Avengers boxed set – and the Hulk is AWESOME!  But a more thorough review is on its way!  Wait… have I even mentioned the clip clock that’s posted above?  No?… huh.  That’s too bad.