Sometimes when searching through ebay you can find some genuinely cool custom made stuff.  I don’t usually dabble into purchasing custom figures or statues but far be it for me to deny others!  Below is an auction for the Space Parasite from The Incredible Hulk #103.  I doubt Marvel Legends will ever get around  making this figure themselves – so if you want it, move fast!  Its ending soon!

Moving on… we have a figure of a character I would LOVE to gin the 12″ scale – but we will probably have to settle for the 6″ figure we got in the 2nd series from the 2008 movie.  Although, this one is more classic style while the official release is more influenced from the video game.

Click on either of the images to be brought to  auctions!  Happy bidding!

Who has an Extra Grand?

Maybe I could borrow it?  And by borrow I mean have.  Can I just have a grand.  I want to buy this thing.  Click on the image to be brought to the auction.

It’s not so much about the item itself as it is about how to value said item.  A cut up, slathered in molding clay head to a 6″ Mego Hulk head is now valued at more than nothing… which is what I would pay for this.

Click the image to be brought to the auction.

I’m all about customizers… but this artist says in the description “THE FIGURE HAS BEEN CUSTOMIZED WITH MORE VIVID COLORS ….COOL CUSTOM PAINTED FIGURE FROM THE MARVEL UNIVERSE!” but… the Hulk never wore colors like that.  The colors may be more vivid – but he also looks like a clown now!

Custom figures takes talent – I’ll state that right away – I can’t do it with the magnitude that some of these artists display… but WTF is this?  I Spider Hulk/ Mecha Hulk/ Abomination hybrid?

Not sure if this will continue being a weekly edition – but you do find odd things on eBay.  Like this Hulky Pokey.  Where is his pants?  Why would you take and keep his pants? 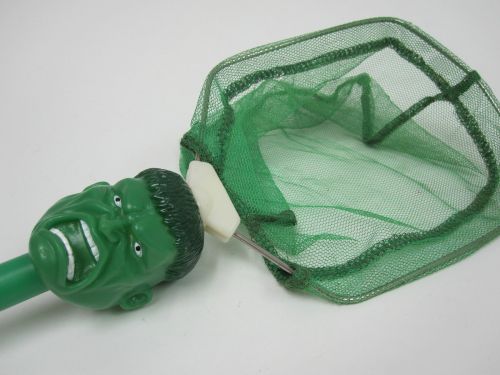 I love finding unique Hulk items… but even I am going to pass on a Hulk aquarium net.  Catching fish out of the aquarium is already traumatic enough – can you imagine having this roaring Hulk chasing you down?  Pulling you out of the water – which you breathe!  You need – to survive!