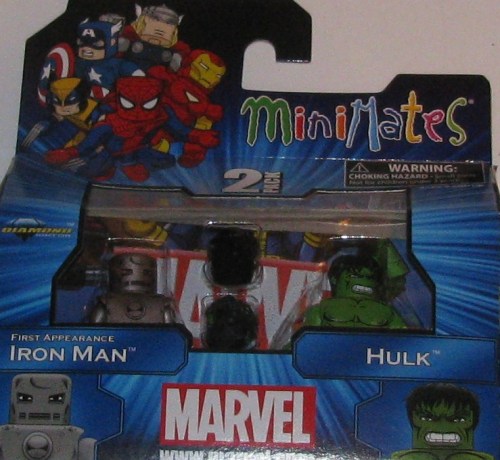 NEW Hulk MiniMate!  This time around the Hulk has sort of a confused – maybe a constipated – or one of those “I’m not guilty” kind of smiles.  I like that this Hulk also comes with a change-O-hair accessory – and messy hair at that!  So now you can display the Hulk in “going out” mode – and “the morning after”.  Note that this Hulk is paired Iron Man – first appearance Iron Man – although they never met until Iron Man had his suit all golden… it doesn’t matter – this is Loeb’s Marvel now!  Continuity matters not! 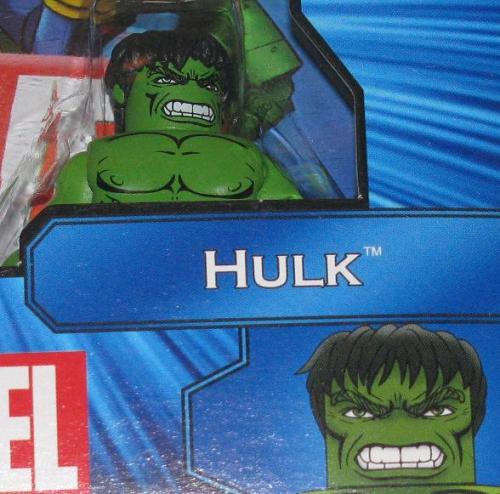 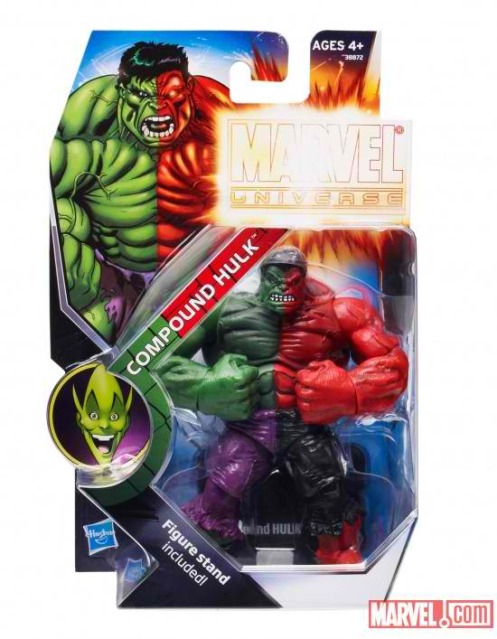 Yes, Hasbro is releasing a Compound Hulk that is a NYCC exclusive.  But Hasbro will also be selling this on their site a few days after the Con.  Although – if anyone is going to NYCC and wants to do me the solid of picking this up for me – I would be ever so grateful! 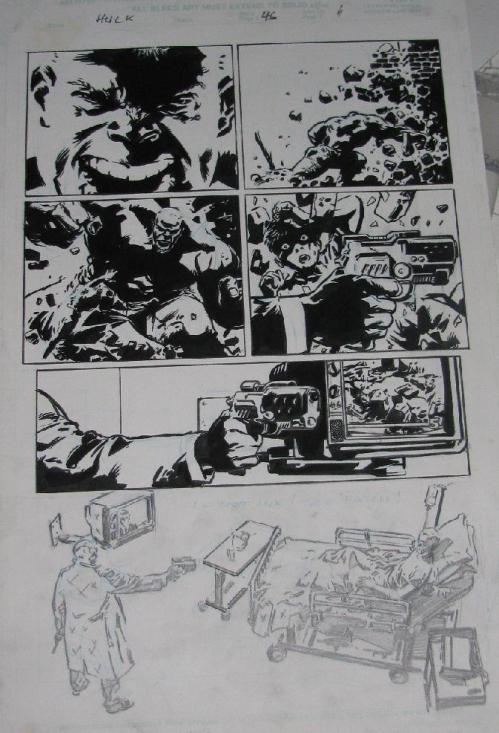 I swear I have not abandoned you guys here – and I will start posting regularly at some point – but things are so busy I… well, I have a secret talent that I have not disclosed yet.  I am working on something that I hope you guys will get a kick out of.  I do have a whole bunch of stuff – including some great art.  I will also be updating the pages on this site – which, for those of you still paying attention and reading, takes time away from posting – but makes this site more user-friendly.  I have read the latest Hulk issues and will be posting reviews soon.  What the hell does this have to do with this art?  Nothing – so let’s get to it!

Yes, this page is from the horrible Bruce Jones run – and yes – one of my least favorite storylines – but it is a pretty unique page as there is a patch page included.  Let’s begin with the fact that Stuart Immonen is the talented artist that had the unfortunate pleasure to draw this storyline.  His style certainly feels like a Film Noir type setting – which would have been perfect if this wasn’t the Hulk we’re talking about!

But the page shows Agent Pratt – who we all know became Super Fatty and then even had the great honor of having the Hulk rip him apart – kidnapping Banner.  The last panel shows an overview of the room where Pratt is pointing the gun at Banner – but that is not what ends up in the book.  For reasons I am unaware of Immonen re-drew the bottom panel to just show Pratt face on – pointing the gun.  It looks pretty amazing but my favorite shots are the Hulk images.  What a classic shot of the Hulk tearing down a brick wall with his rage-full fists!  Did that sound a bit geeky?  It was totally supposed to!

Is he watching Fox News? Ugh...

I have to tell you – I was dead set against picking this up – not because I don’t like the character or was disappointed in the way it came out but more because of the sheer size of this mother!  True to the character, this massive statue is bigger than any of the Hulk statues that Bowen has released.  Even better – it’s obviously Byrne inspired from Uncanny X-Men #140.

Classic cover and now classic statue!  It’s amazing how some sculpts made in 3-D can work so well, and that’s one of the things that Bowen does better than anyone else.  You would be hard pressed to find another company who can make statues of our favorite comic characters that look as though they’ve popped off the page!

It's the whole she-bang!

Now, I told you I was pretty much resigned to not picking this up but I walked into Comically Speaking in Reading, MA and I was floored when seeing it in person.  Not only did I pick it up but when I got home I instantly got busy making the perfect display.  I’ve always thought that Bowen’s 1st appearance action Wolverine went well with the Smack-Down Hulk – but without Wendigo in the mix the display is missing something. 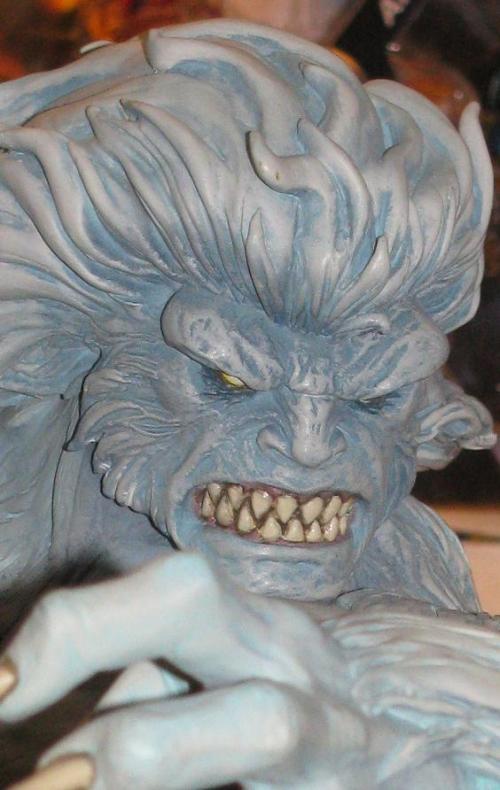 A Mug only a Mother could love... too bad he would probably eat his mother

Just like the Wendigo bust (which has the greatest base ever!) the FS base is scattered with skulls.  While the bust was certainly Trimpe inspired – Bowen went another direction this time, as I mentioned before, with a Byrne inspiration.  But this time we at least get a peek at that HUGE tail!  The tail and the mane (which was Byrne’s real contribution to this character) are probably my favorite parts of this statue.

I am not an animal!

I mentioned how large this piece is – but unless you can see it you will never fully realize what I mean.  Factor in the frailty of the tail and claws – you are seeing a very rare piece.  I know Bowen only released 450 of these (and when I say 450 I don’t mean 450 regular with another 450 exclusive – for all of you math illiterate people out there it means there are actually 900 statues out there, yeah – BD doesn’t play that way) and if that seems low to you – it is.  If you have a chance to snatch one of these up – DO IT! 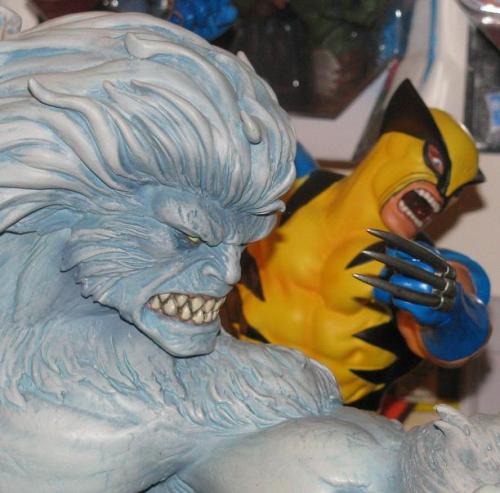 Who thinks these two should be a comic team?

So, in closing, we are very lucky to have a company like BD doing comic statues like these and for as long as he has – because we are getting characters that I never dreamed of seeing as busts and FS.  Who else thought we’d see a Ring Master bust?  Not I!  And a Wendigo FS!?!?  So, let’s support BD – if this is not you’re cup of tea – that’s fine, you’re nuts, but that’s fine – BD has something for everyone.  Check it out for yourself! 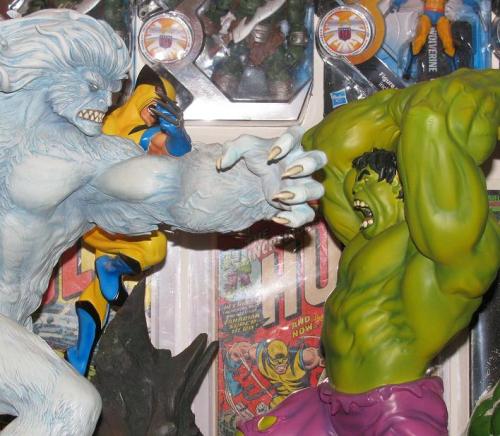 Together - they still don't stand a chance!

Now for a shot of the display: 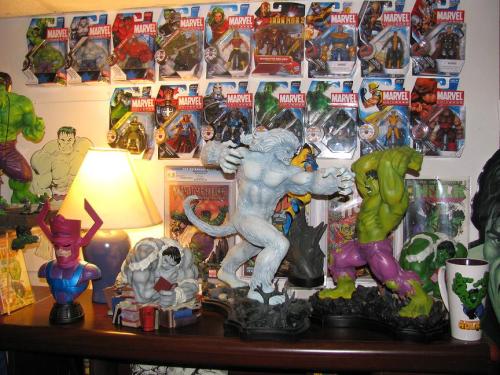 My Desk - how do I ever get any work done?

When these figures started showing up on the shelves I told you, thanks to the information provided by Gammapup, that there was a variant.  Not on the figure but on the little stand that comes in the package.

One of the stands says “Son of Hulk” while the other says “Skaar”.  I am not sure if one is more rare than the other but honestly – if it’s just the stand – does it really matter?  No, I don’t think it does either!

Alright, here’s a couple of great stories for you!  These new Marvel charms came out and the Hulk is obviously included.  They are released in solid boxes so you cannot see what character is inside – a practice I somewhat hate but is pretty ingenious in getting people to buy more than they originally intend to.  Well, I wasn’t falling for it and decided to skip this little Hulk piece.  As I walked up to the register the man saw me looking at the Tokidoki boxes and said that he and a bunch of friends bought a whole slew of them and love them.  He then picked up his set of keys and showed me the charm he opened and – wouldn’t you know it – it was the Hulk!  I said “That’s the only one I would be interested in.”  He told me he would give me his Hulk – all I had to do was purchase another one to replace it.  Well, that was not only a generous offer but enough to get me to buy a piece I had written off.  By the way, the one I purchased for him was Rogue.

THEN, I was in a little comic shop last week and the owner had just gotten a whole shipment of these charms in.  He was talking them up and I said I already had the one I wanted – the Hulk.  He said he felt like a gambling man and told me if I could pick out another Hulk that I could have it for free – if I picked out any other character I would have to pay for it.  I was in a good mood and decided to play along.  I picked up each box – shook it – weighed each in my hand and the selected a box.  I was not confident at all that it had the Hulk inside – but, as it turns out… 🙂 :

Two Hulks for the price of one Rogue! Woo Hoo!

So now I have two of these little guys – don’t worry – they are friends and get along famously!