This comic isn’t terrible.  Actually, it’s quite enjoyable.  Not the usual Hulk read.  It covers the stroy of Fred Sloan trying to write a story about the Hulk that willmake people understand him better.  Pretty fun read that covers a lot of the early Hulk stories.  An old guard that Rick Jones snuck past tells his side of what happened.  A little girl that was saved by the Hulk while on a bus that stalled on train tracks tells her story.  And even an old man whose life was ruined the day he ran into a car becasue he saw the Hulk and no one believed him.

They also reprint the Hulk Annual #7 (which is great because it is one that I am still missing!) With John Byrne’s art.  A welcomed flashback with a great story. B+ 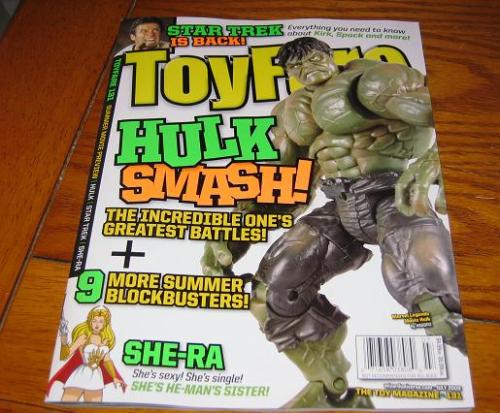 So, we have a few sneak peeks at the Hulk toys that will be gracing the toy shelves this June.  The re-vamped, Target Exclusive Marvel Legends Hulk will be great!  Wal*Mart has an Abomination/Hulk 2-pack coming out.  They also have a quick section where they discuss Hulk’s best battles.  Although I think the list is skewed – a lot! – (Hulk vs. Thor is on the low end of this list!) it’s still pretty fun to see lists like these.  Especially when you disagree so adamantly.   On the shelves now!  Hulk on the cover doesn’t hurt either!

I have one of these shirts for my nephew – and then I bought another for when I have a little one I will deck out in Hulk!  I love the classic image and the vintage feel of the shirt.  I was happy to see they were releasing more than just the movie images of the Hulk.